This is a handy tip for those moments when you’ve gone to see a loud band and forgotten to take earplugs, and one that I’ve used numerous times to “reset” my ears after a gig. I was shown this trick about 20 years ago by a friend and have been using it since then, but in preparing this blog I’ve also found lots of supporting evidence on the web that reinforces the basic concept. It has definitely and audibly worked for me and others that I’ve shown it to and it really can’t hurt to try it. Actually it does hurt a bit when you find the right spot to press, and I also have to admit it looks a bit stupid when you’re doing it, so best not do it when actually walking out of the gig – at least wait till you’re in the car when nobody can see you.

Press and hold the area shown in the diagram – it’s in the hollow just in front of the ear lobe. If you press the right spot it will feel tender, and after a few minutes you should feel the “cotton-wool” feeling diminish and your hearing begin to return. 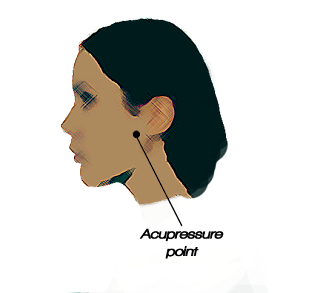 Threshold Shift, for those who don’t know, is muffled high-frequencies or pressure or ringing in your ears that you can feel as you’re walking out of a loud gig. This is extremely dangerous in the long-term, and has even more significance nowadays for long-term headphone or ear-bud use.

What happens is that when loud noise is perceived by the brain, it attempts to protect your hearing by tightening the muscles inside the ear in order to reduce the amount of noise passing through the ear mechanism. A fantastic system really, but not designed for a lifetime of loud music or industrial noise.

This muscle constriction can also restrict blood flow to the inner ear, and if it happens repeatedly it can cause long-term damage to the nerve cells in the inner ear, which eventually end up dying. Fatally. As Motorhead almost said – “Killed by Deaf”.

This acupressure trick relieves the constriction of the muscles around and in your ear, and hence allows full blood flow again to the nerves in the ear, hopefully extending the life of your hearing a bit longer. Obviously it won’t suddenly reincarnate the dead nerve cells in your inner ear, but if used early and often enough it will hopefully at least minimise the damage somewhat. No guarantees of course.

* Threshold shift and associated long-term hearing damage are not the only cause of hearing damage. I have met people who have lost hearing with a single exposure to a loud impulse sound (someone pressing the wrong button on the mixing console and blasting maximum volume through the headphones, or a massively loud click through a PA system at a gig) as well as others who have ended up with tinnitus (ringing in the ears) which can last FOR THE REST OF YOUR LIFE. Apart from these problems there are other odd things that can happen related to your inner ear – for example upsetting your sense of balance. Not much fun – I had continuous vertigo for a few days when I had the nasty flu earlier last year – no laughing matter as I ride a motorcycle to work.

Noise vs Music – I’ve often pondered this as I’ve been assaulted by a band that sounds like crap – as long as you perceive the music as, well music, your brain isn’t trying to shut your ears down, but if the band sucks and it sounds like obnoxious noise they’re effectively killing your ears! Obvious solutions – drink more alcohol to thin the blood and keep that oxygen getting to the ear cells, or try to psych yourself into believing the band is awesome, thereby fooling your own brain.
My wife says “why don’t you just leave?”, but I view that as defeatist.

Factoid 1: Research disputes what I just said before. Studies have shown that musicians suffer as much hearing damage as those exposed to industrial noise of equivalent level. I argue that musicians aren’t ever just exposed to music they like (we usually all have to share gigs with other bands), or other loud noise, so it’s hard to prove this either way without adequate methods or controls.

Factoid 2: Published Acceptable Exposure Time vs Sound level graphs are based on industrial noise, not music. At 110dBA your acceptable daily exposure time is 1 min 30 seconds!

Other (more serious) solutions:
Obviously, considering all this, the best solution is to avoid loud sound or wear appropriate hearing protection. Go get some proper earplugs -the custom-moulded “musician’s” earplugs are pretty darn good- they’re relatively “flat” and uncolored but there are other slightly cheaper options as well (custom-fitted plugs can be quite expensive, but they last for years with careful use). The problem I’ve found with them is you can truly hear how out-of-tune the singer is when watching a live band which might ruin your enjoyment or “perception of talent” slightly, but I have to say I’ve been to gigs and wearing some -15dB custom plugs and my eardrums have still been distorting painfully at times. You can get -25dB or more reduction plugs, and some come with both inserts as options so you can swap them.

And finally an observation – isn’t it weird how society is au-fait with people wearing glasses to correct their vision, but wearing a hearing aid has a stigma attached to it. You see graphic artists, photographers, directors and numerous other industry professionals (who rely on visual acuity!) wearing glasses, but would you trust an audio engineer with a hearing aid? Hmmmmm.
Not that I need one YET, just paving the way for the future.