The Apogee Gio and Mainstage Experiment

I have a solo gig coming up and have decided that being yet another singer-songwriter is boring as hell. Especially as I haven’t been blessed with one of those voices that could make singing the shopping list sound awesome.

So I need to use everything in my power to add value and variety to the gig – hence the MainStage experiment.

I wanted to be able to go from simple vocal and guitar to full-on backing based on my recorded songs. While keeping it all “live” and interactive so I can jam it out a bit if the opportunity arises.

The beauty of MainStage 2 is that it’s basically the guts of Logic Pro bundled into an application for performing live. That means you get the same instruments and effects, plus any of your third-party plug-ins as well. 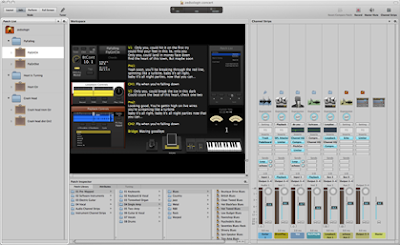 It means you can also add bounced backing tracks for your songs – with markers that you can loop around or jump to. The markers allow you to see what song section’s coming up next in case you forgot.

And there’s a cool Looper plug-in that allows you to recreate the current trend of having those dinky guitar pedals that allow you to build up your own musical or percussive layers during a live set. You just play something in, hit the pedal and it loops around while you play something over the top, or you can just keep recording more layers, undo the last one, or clear it all and start fresh. 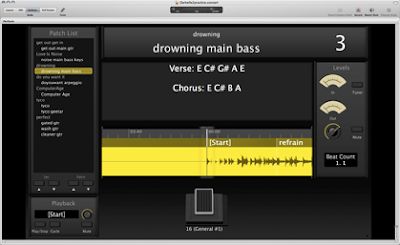 MainStage allows you to create your own user-interface – you can customise what you are looking at on the computer screen, and also create objects that will be controlled by whatever pedals, buttons, knobs, faders or keyboards you have connected to it in the real world.

Hence me also getting an Apogee Gio – this allows me to have 12 buttons on the foot controller that I can assign to whatever I need to per song, and I can also plug in my expression pedal to do my chucka-chucka-wah-wah thing.

The Gio also has a built-in audio input for guitar or bass, which actually sounds great. Apogee are renowned for their great-sounding converters and it’s nice to find even their cheap-ish ones are good. Definitely a good way of getting your instrument into MainStage.

The only hassles I had were when I wanted to plug in a microphone as well as my guitar – meaning I had to use another audio interface as well – in this case an M-Box Pro.

Apple’s OSX allows you to combine two separate interfaces together as an aggregate device so they appear as one source to the audio application, but no matter which way I did it, they didn’t play nice with each other, eventually degrading the audio quality.

So I had to ditch the awesome sound of the Apogee for the more average M-Box one.
Oh well – at least the Gio buttons still worked and looked pretty.
The little LED indicators change color to suit what the pedals are mapped to in MainStage – ooooh aaaaah….

When you use the Gio with Logic, and apparently GarageBand as well, the foot controls are automatically mapped to Record, Play, Rewind, Fast Forward etc for hands-free recording which is a bonus.

Build quality of the Gio is great by the way – it’s a solid little unit – quite heavy in fact, so it’s going to stay put on stage, and feels fairly indestructible.

So, for the moment I’m still wrestling my way through customizing MainStage for the upcoming gig – there’s still a trick or two I need to learn. There’s a Concert/Set/Patch hierarchy that is important to get your head around otherwise the backing stops when you change guitar patches for example – and the synchronisation options with backing tracks and loops has some quirks.

But I’m getting there bit by bit, so I’ll let you know how it goes…

3 responses to “The Apogee Gio and Mainstage Experiment”